Get ready for your trip to Morocco. Order your Moroccan Dirhams at Manor FX today. Our great exchange rates mean you'll have more MAD cash to spend. Have your Moroccan Dirham banknotes delivered securely to your home or office, or pick them up from the Manor FX bureau near Heathrow.

Jet off well-informed to Morocco. Here are some handy facts about cash and card payments in Morocco.

Can I use my bank card in Morocco?

Paying by credit card or debit card in Morocco is generally possible in the main tourist centres of Morocco's main cities: Agadir, Casablanca, Fes and Marrakech. But even in the main tourist cities there is a large part of the economy that is cash-only. Vendors only accepting cash are for example taxi drivers and vendors in the Souks, the traditional Arab markets.

Before using your bank card for payments in The Maghreb and North Africa it's certainly a good idea to contact your bank. This will avoid your card becoming blocked due to international transactions that your bank may find suspicious.

Do I need cash in Morocco?

It's certainly recommended to take the maximum Moroccan Dirham cash allowance into Morocco: 2000 dirhams per person. Many vendors in Morocco only accept cash payments, for example salesmen in Souk markets and taxi drivers. You'll also need cash dirhams for tipping.

You can purchase extra Moroccan Dirhams in Morocco but it's advisable not to do so on the airport as exchange rates there are quite bad. The best rates for buying Dirhams are offered when bought with Euros or US dollars.

Is life expensive in Morocco?

For a coffee in a cafe in Marrakech you can expect to pay around 12 MAD. A three-course meal in a mid-range restaurant will cost you about 100 MAD per person.

How does tipping work in Morocco?

Tourists in Morocco are free to give a tip if they want. There is no formal tipping culture in Morocco and locals tend to round up the bill when tipping. In most tourist places a 10% tip is the norm. Some restaurantes may add a service charge, so check your bill.

If you like the service, and if there isn't already a service charge on the bill, you can leave a tip of 10% or more, in cash.

Issued by the Rabat-based Bank Al-Maghrib since 2012, the current set of Dirham banknotes all bear the image of King Mohammed VI. The notes in use are 20 MAD, 50 MAD, 100 MAD and 200 MAD. The banknotes of 10 dirhams have been replaced by coins.

Moroccan coins range from 10 santimat (0.10 MAD) to the bi-metallic 10 dirhams. Did you get back from Morocco with some leftover coins? Our sister company Leftover Currency can help you to exchange Moroccan Dirham coins back to cash. 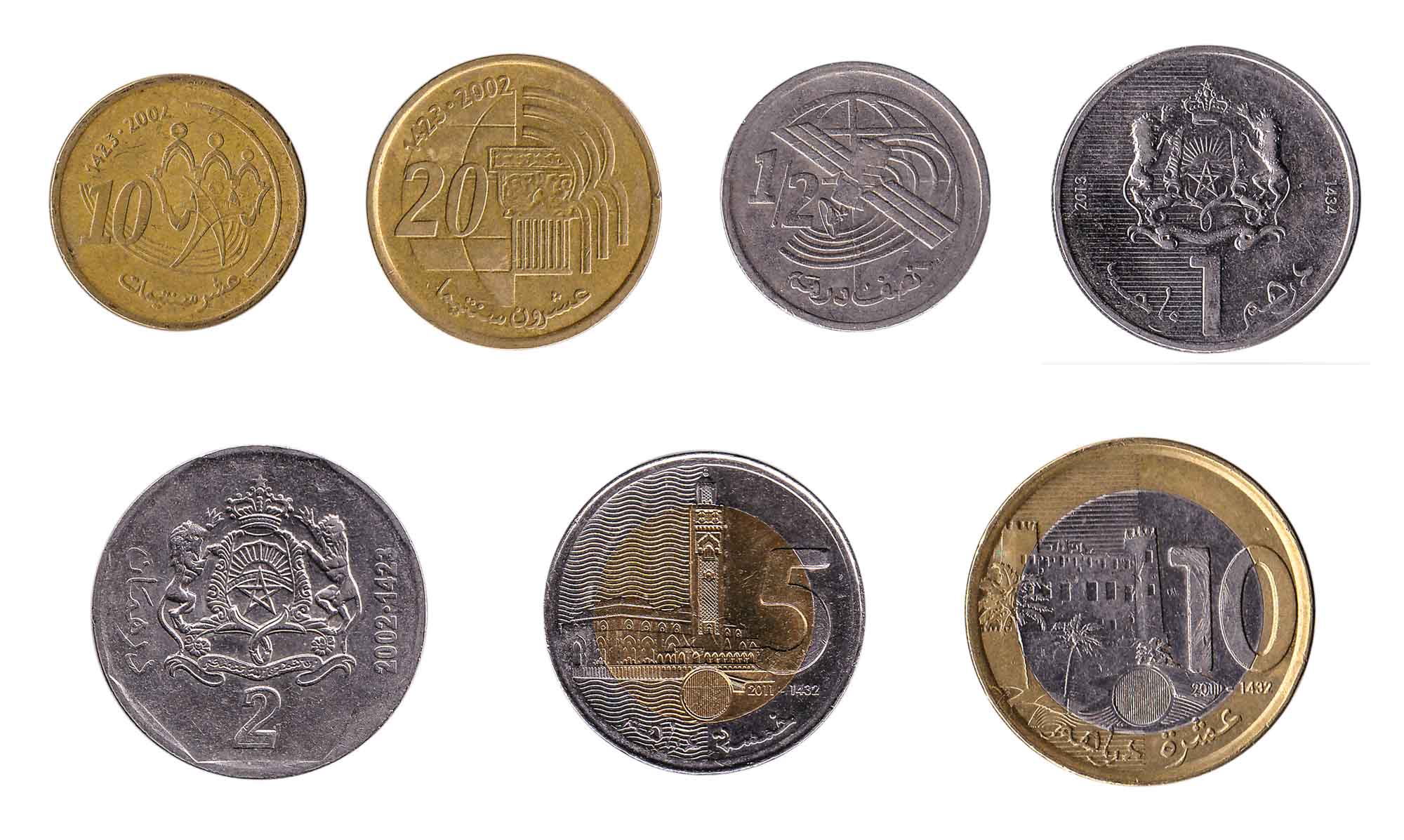 Each traveler can take a maximum of 2000 Moroccan Dirhams into and out of the Kingdom of Morocco. If you are carrying over the equivalent of 100,000 MAD you need to make a cash declaration, both on arrival and when departing Morocco.