Travel advise: payments in the Caribbean

Jet off well-informed to the Caribbean. Here are some handy facts about cash and card payments in Antigua and Barbuda, Anguilla, Dominica, Grenada, Montserrat, Saint Kitts and Nevis, Saint Lucia and Saint Vincent & the Grenadines.

Can I use my bank card in the Caribbean?

In all countries of the Organisation of Eastern Caribbean States, cash remains the most widely used method of payment, and the one most popular with locals.

Some British banks may charge for international card payments. In addition your bank's XCD to GBP exchange rate may not be so good. This is how banks make money. Before using your bank card for payments in the Caribbean, it's certainly a good idea to contact your bank. This will avoid your card becoming blocked due to international transactions that your bank may find suspicious.

Do I need cash in the Caribbean?

You should certainly take Eastern Caribbean Dollar banknotes with you when you visit any of the islands in the Organisation of Eastern Caribbean States: Antigua and Barbuda, Anguilla, Dominica, Grenada, Montserrat, Saint Kitts and Nevis, Saint Lucia and Saint Vincent & the Grenadines.

Card payments aren't widely available at local vendors. Cash remains the most used method of payment in the Caribbean.

Is life expensive in the Caribbean?

Prices vary much on the different Caribbean islands. Expect to pay around $10-$15 XCD for a coffee and $50-$80 for a three-course meal.

How does tipping work in the Caribbean?

It's not expected that you leave a tip in the Caribbean. However if you want to leave a tip it's recommended that you give the money to the waiter in a discrete way, to avoid that the server has the money confiscated by management later.

Banknotes in the Caribbean

Eastern Caribbean Dollar banknotes in circulation are $5, $10, $20, $50 and $100. Different versions of the same denomination are in circulation: Some with holographic security thread and some without, both types are good for spending.

All Eastern Caribbean Dollar banknotes have the portrait of a young Queen Elizabeth II on the front side.

Coins in the Caribbean

Caribbean coins range from 1c to 1. Did you get back from the Caribbean with some leftover coins? Our sister company Leftover Currency can help you to exchange Eastern Caribbean Dollar coins back to cash. 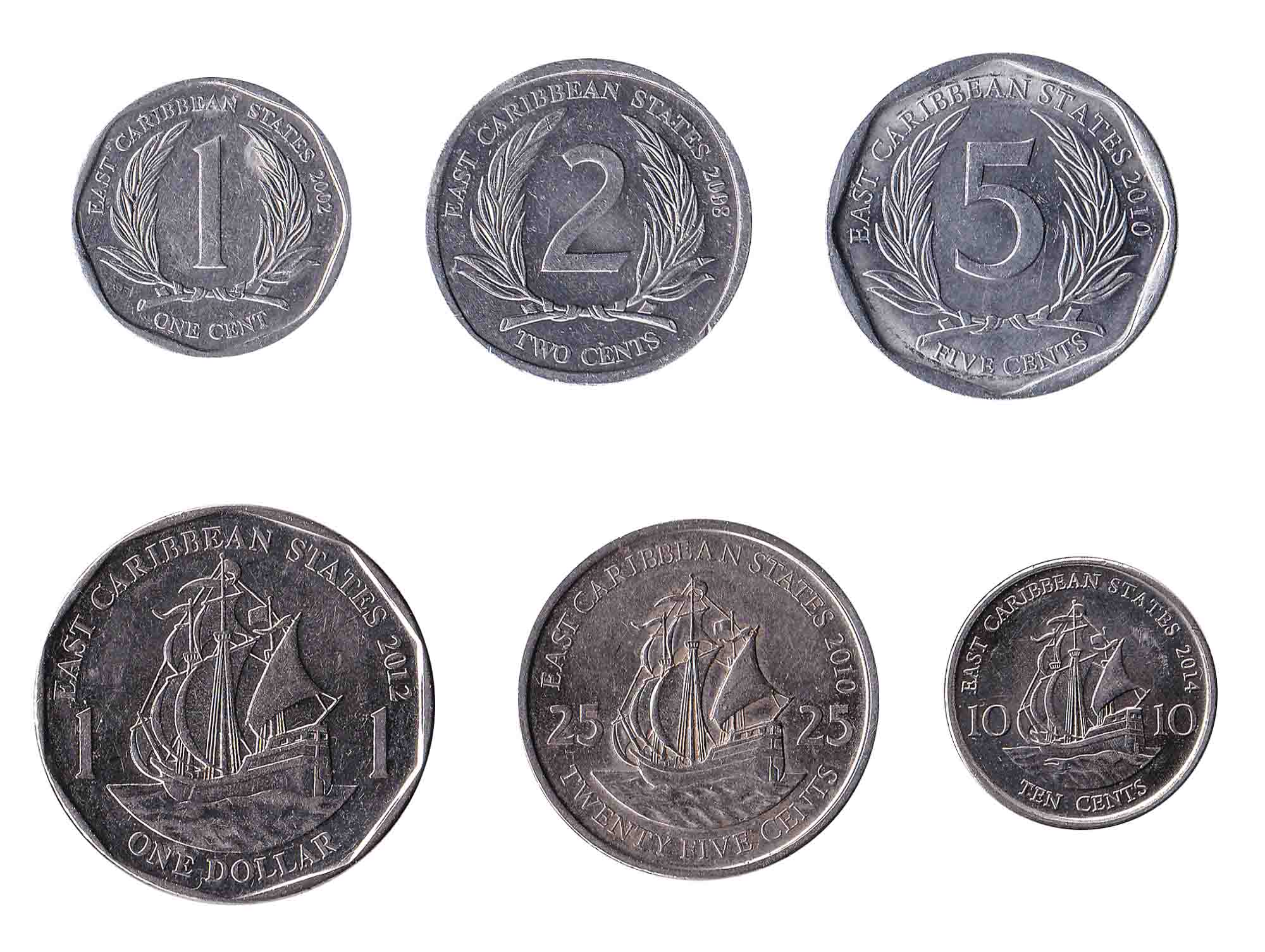 The rules regarding the import and export of currency in the Caribbean depend on the place you are visiting:

In Antigua and Barbuda, currency with a value over $10,000 USD needs to be declared when entering or leaving the country.

In Anguilla and Montserrat, St. Kitts and Nevis, St. Vincent and the Grenadines: no currency restrictions apply but you must declare any foreign currency you are importing and exporting. You can export up to the amount you declared upon arrival.

In Dominica, XCD dollars and foreign currency can be exported for maximum the same amount as the value declared upon arrival. If you hold a credit card, the maximum amount of XCD is $2,500. For any XCD in excess of this amount you need to show proof of conversion (e.g. receipts).

In Grenada and St. Lucia, no currency restrictions apply.